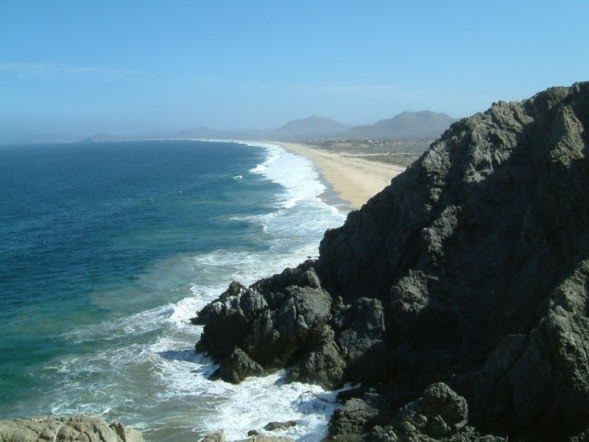 I am not proud to tell you that we live in a cocoon here, on Arriba de la Roca. Most of what goes on in the world remains a mystery to us, unless we are told by someone, or if it pops up on the internet. So last Friday at 6:30 in the morning we were a little surprised to receive a “wake-up” call from the man who owns the yoga center next to us. He asked if we heard about the Tsunami. Of course we hadn't. So he fills us in on the earthquake and the potential Tsunami that is heading towards us. He asks if he can bring his 30 yoga students to our house for safety. My first thought is OH MY GOD!! THE KIDS JUST LEFT LAST NIGHT AND THE PLACE IS A MESS!!!

Yes, I realize I am a sick puppy, but some cleaning-obsessed people may understand my concern. But of course I say, yes, and ask when they will be coming up?? He says The Tsunami is supposed to hit here about 10am and he will get back to me in an hour...that’s 7:30. Up I jump...grab the vacuum cleaner and start to clean. I am in a panic!!! We just had 6 people..two of them a 2 and 5 year old, here for a week!!! I let the whole place go, because it was easier and less stressful for them. I did not want them to worry about picking up or cleaning...although they still did SO much of that! Anyway, I am vacuuming, washing dishes, cleaning bathrooms and I go into our bedroom. I am thinking Maurice is upstairs cleaning his office. WRONG, he was playing Sudoku. Did I over react? Did I raise my voice? Did I beg him to HELP ME!!!! Yes, all of the above. Maurice jumps into cleaning mode!...shaking his head the whole time.

So Craig, that is his name, calls us back and says they will all be here in 30 minutes. This means they would be here about 8. I say, as calmly as possible...."But Craig, I thought the Tsunami, the affect of one of the worst earthquake in the past 100 years does not hit here until 10am??? You see, kind sir, I am busy vacuuming and cleaning our house for our "guests", and there is no way you can come here in 30 minutes.”

Seriously WHAT THE HECK IS THE MATTER WITH ME!!!. He then tells me no worries; they had adjusted the potential time for hitting here to close to noon. COOL!!! I told him I would call him back in an hour and give him a time that was “safe” for him to come up with his 30 students. He then offered to pay. He probably thought no one in their right mind would seriously NOT want to save 30 people from a Tsunami because their house was not vacuumed!!! I told him he did not have to pay...NO WAY...they were totally welcome, but I was just a little fussy!

So I call him back at 8:45 and tell him it is all clear. Maurice helped me lots and he convinced me NOT to clean the two casitas where the kids stayed. Of course, he said, no one would go in them. When I call him now, Craig tells me they will not come up until 10. Whew! I can clean more!! Close to ten he calls me and says that it appears the Tsunami has lost a lot of its steam. We were far enough south that it will not be a threat to us, except in a minor way, if at all.

So our day goes on. The electricians come to finally hang the light in our bedroom, our worker Jesus is here doing some things and Maurice tells me all the yoga people are on the adjacent cliff looking out to the ocean. OH, I think, I bet they are watching for the Tsunami; as minor as it may be. I grab the binoculars and camera and go to watch, too. I figure there will be some type of wave that comes that is bigger then the others. Nope. Not a one! At least from our vantage we could see nothing. Suffice to say I was disappointed. Yes, I have to admit the idea of a tsunami hitting here excited me....in an I-know-we-are-really-not-in-danger kind of way.!! So I felt let down!!

Weird though, if we had not gotten the many e-mails we did, or if Craig had not called we would not have had a clue about this terrible disaster.

So after the "risk" of the Tsunami had passed, and the house is clean, and I am sitting behind the bar on the computer reading about the earthquake etc. I see yoga people filtering through in front of our house. They sit at the fire pit, go to the outdoor kitchen, and are taking pictures everywhere. They had walked over from the cliff and, knowing they were going to seek refuge here earlier, came for a tour. They were all lovely and very complimentary of our place and YES they did tour Pacifica and Boca, the un-cleaned units...with me tailing behind saying, "Sorry I have not cleaned these yet, we just had guests that left." Yes, I know...seek help!! LOL!!

That is the story of how one of the worst tragedies in the past 100 years affected us on Arriba de la Roca.
Posted by The Branzanti's at 10:11 AM No comments:

The sun is shining.

It is warm and breezy.

The sun will soon set magnificently over the ocean; right in front of our bedroom windows, no less.

At this time of month the moon is now a sliver and barely lights up the sky at night, but I see it in the mornings when I get up...still over the Sierra da la Laguna mountains.

Retro broke his toe, or foot today. Very sad as he limps around holding his rear leg up.

Today there are no clouds in the sky...again.

Tomorrow the vet is in town. We will take Retro in the morning.

Scanning the best and worst dressed at Oscar night on my computer. AND I THOUGHT I DID NOT MISS PEOPLE MAGAZINE!!!

Sipping a rum and coke...yummy

Putting the finishing touches on our web site!

Had many guests...all people we love. Kids coming in two sleeps!

The whales are finishing their migration. Been a busy year for them and a great year for us whale watchers.

Are we happy we missed the worst winter in 35 years? Yes we are.

The days still fly by. Tomorrow is pizza night. Weren’t we just there??

Retro is licking his back paw. His nose is getting dry. Ahhhhhh

Watered all the plants below today. Will do up on top tomorrow.

How can I walk the beach without Retro? The guilt will kill me.

We are going to have to put Jesus (pronounced HEY SEUS) down to two days a week. Now that is HARD!!! I am sure harder for him. Even though he knows the "end is near" we will tell him “soon”.

Maurice installed bars in our closets today. I can finally hang up clothes!! Helpful, since we do not iron.

Got our weekly water delivery today, too. Who else gets their watered delivered to them??...not many reading this blog I am sure.

Want to plant more plants, but will need to order more water. More plants vs. more water? Plants will win.

Yes, Maurice still has his snake.

My word the ocean is crazy blue this time of day.

Has anyone really ever seen a “green flash”??? We look every night...no luck. 30 minutes to sun set.

Retro is looking at me with furrowed brow. He sighs. Sorry, guy, can not help this time. The cactus we can pull out of your foot or mouth; the burrs we can remove...we can put iodine on your cuts from the barbed wire..the fleas we can get rid of. This time...only time will help.

There are two hikers on the cliff next to me. It appears they are settling in to watch the sun set. Think I will settle in, too.
Posted by The Branzanti's at 4:58 PM 1 comment: 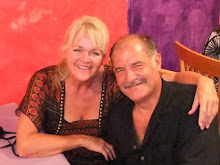 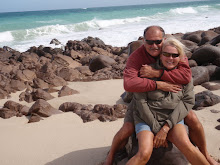